I was coaching a woman named Sarah who was convinced that she was going to get fired. She and her boss got along horribly. She’d end up in tears—Every. Single. Meeting. She did what she could to avoid her boss. And she felt totally alone in her organization with no support. As her coach, I knew she was more connected to people both within and outside of the organization who would go to bat for her in a heartbeat if they knew she was on the verge of being fired.

As a coaching assignment, we drew up a relationship map. A relationship map can help you view and assess the strength of your career support network. It is a useful tool to keep in mind when you want to consider your personal influence at work, and it is a useful tool to help you navigate issues that are tricky from an organizational savvy standpoint. It takes just a few minutes, but can quickly give you an at-a-glance view of something that is golden career knowledge: Exactly who’s got your back?

Using a Relationship Map to Assess Your Career Support Network

Sarah and I used a relationship map. I asked her to put herself in the middle, then draw a circle naming the people she had the most frequent contact with and consider the strengths of these relationships. Next, I asked Sarah to go outside her “inner circle” and identify her internal clients who she helped solve problems that made them more productive and effective. Lastly, I had her identify people she needed to know to strengthen her position.  Looking at the map, she reflected on the question, “Who’s got your back?” It turns out that Sarah was so clouded by the challenges with her boss that she did not realize she had functioning relationships with multiple internal stakeholders. At this point, she was able to breathe a small sigh of relief, but she knew there was work to be done. 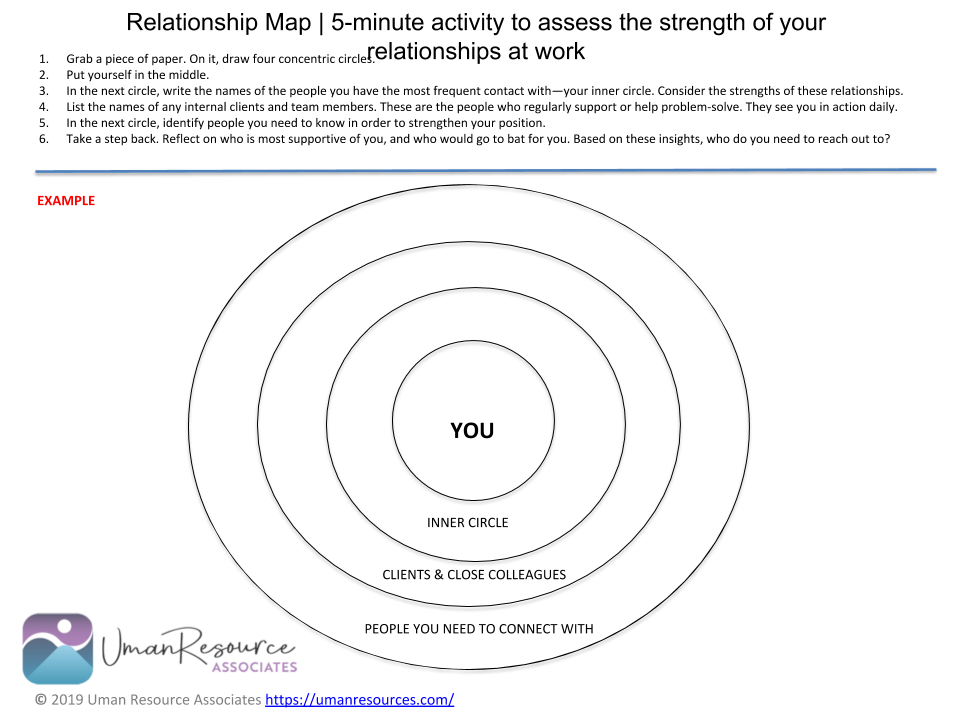 You Drew The Map – Now What?

As a next step, I urged Sarah to connect with some of the other key people on her map and talk over coffee. The thought that she could “just reach out” to them “just like that” was a revelation to her! As a strong introvert, making time to talk through her challenges with others was not part of her process. It did not occur to her to call on her trusted colleagues. One by one, Sarah reached out to her colleagues and they helped provide guidance and, to some extent, shelter from the bad boss.

Sarah’s story started with the bad boss, and ended a few months later with an award! The map was a powerful visual that helped her realize that she was not alone. The lesson is that, it’s not just about developing your network, it’s about leveraging it.